A Czech thriller about cyberbullying has won an international Emmy Award for best short-form series. The eight-part series #martyisdead was the first Czech production ever nominated for the prestigious American award, which honours excellence in TV programming produced and first aired outside the United States.

“The Czech Republic is a small country, and Mall.TV is a small [internet television station], but this award is a big success for us – and a huge motivation for the future. Thank you very much!”

– #martyisdead co-dramaturg Karel Špěšný, accepting the Emmy by videolink along with Vratislav Šlajer (who went on to thank by name everyone who worked on the ground-breaking miniseries).

The “thriller, detective story and family drama” takes place after the tragic death of a 15-year-old boy named Marty, who has left behind some chilling videos. His grieving father is left to try to piece together clues from Marty’s online life to understand the tragedy.

He logs into Marty’s Facebook account and discovers that his son had long been exchanging messages (and more) with someone using the profile name “pohledné dívky”, or “good-looking girls”, and was blackmailed. 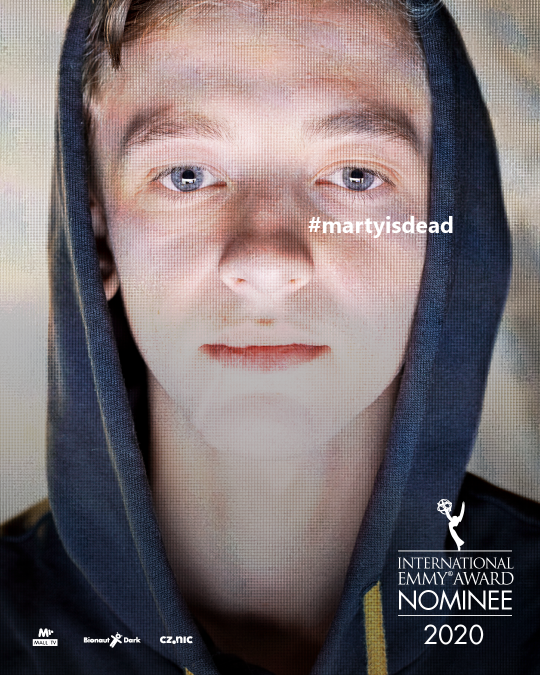 The series #martyisdead, created as part of the Safer Internet programme, was inspired by actual cases of cyberbullying, including extorting teens to send nude photos and videos of themselves.

“We had begun exploring a bit different theme. Two or three years ago, the Blue Whale ‘urban legend’ or hoax appeared in the media. There was a report that Russian teenagers, as part of an online game, were doing dangerous tasks online for some kind of reward. The final task is to kill yourself and film it.

“At first, we were fascinated with how such hoaxes arise, who are behind them and what the consequences are. Then we discovered many more horrible real stories, which became the backbone of the series.”

While drawing inspiration from real-life cyberbullying cases, #martyisdead also drew on the expertise of child psychologists, Internet security experts and other professionals working to combat the problem.

You can read the full article on Radio Prague International.